If you are new to vaping, you may have some concerns about the ingredients that e-liquids contain.

Lots of people have a lack of knowledge about e-liquids and find the idea of vaporizing a nicotine containing liquid rather strange, however they can be assured that it is certainly a safer and better alternative to smoking regular tobacco. 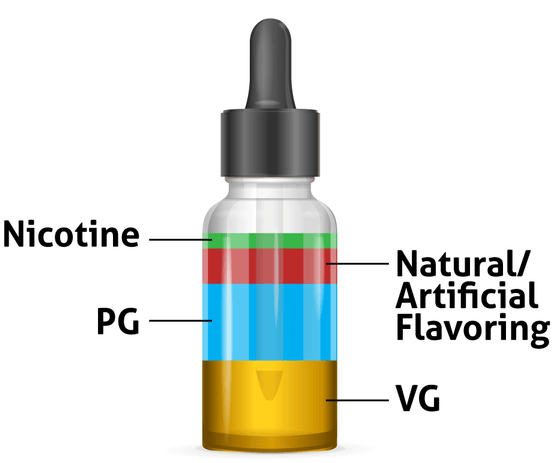 PG and VG: The Base of Vape Juice

While smoking standard cigarettes exposes you to toxins and carcinogens, vaping e-cigs have far fewer ingredients that can cause damage to your health.

While some people have concern about the safety of vaporising Propylene Glycol and Vegetable Glycerin, they can be satisfied that these are ingredients that are commonly contained in all kinds of popular substances such as food preservatives, pharmaceuticals and makeup and so are bound to be safer than traditional tobacco products.

Although Propylene Glycol has a bit of a poor reputation with a few critics declaring that vaping e-cigs is akin to inhaling antifreeze, this is certainly not the case.

Only industrial grade propylene glycol is used to produce antifreeze and not the product in its pure form.

USP Propylene Glycol is used to manufacture e-liquids and it is 99.9% pure, being pharmaceutical grade.

The Food and Drug Administration have classified it as a safe food additive and it is used regularly in food products, cosmetics and medicines to maintain moisture.

While PG may cause a dry mouth occasionally and does not produce large vapour clouds, it does have a useful function for improving the carrying of flavour, which is why it is used to make e-liquids.

Just as safe as PG, Vegetable Glycerin is non-toxic and non-carcinogenic. It can be either inhaled or ingested and will cause no harmful effect to any body part.

It also produces large vapour clouds, but does not carry flavour effectively, hence the reason why it is mixed with Propylene Glycol to produce the ideal combination of flavour and vapour.

While PG may cause allergic reactions in some people, VG is known to be hypoallergenic.

Nicotine is the ingredient that keeps everyone addicted to regular cigarettes and it is therefore one of the key ingredients found in most e-juices.

There are however a number of differences between them. In standard cigarettes, there is no measure to the nicotine content, however in e-juice, the nicotine level is strictly measured and is able to be customised to suit the vaper’s preference and taste.

Nicotine levels vary between manufacturers, but is usually marked with a percentage, or alternatively as mg/ml. Usually the following strengths are found:

0.0% (0mg/ml) – Perfect for anyone who has stopped smoking, but wants to feel the experience of smoking.

1.8% (18 mg/ml) – An average level of nicotine, this is the perfect level for those who enjoy a nicotine hit as well as for regular smokers.

By using these levels, you can choose the best nicotine strength for you. For those who are struggling to quit smoking, even when using e-cigarettes, you should try to increase the nicotine strength of your vape juice.

If, however, you experience symptoms such as dizziness, you should decrease the strength and speak to your physician.

E-juices contain flavouring concentrates which are made up of a blend of artificial and natural flavours that replicate the tastes of certain drinks or foods.

Manufacturers of e-liquids use GRAS or food-grade flavouring concentrates in their products which are typically found in candy, soda, processed foods and baked goods.

When creating different vape juice flavours, one simple flavour like strawberry may require a number of different flavour concentrates to properly replicate the taste of an actual strawberry. For this reason, mixology is both an art and a science.

Flavouring concentrates only make up 10%, or less of the total content of an e-juice and no oil-based flavourings are used in e-liquids.

There are some flavouring which contains ingredients that are potentially hazardous if they are inhaled. Acetyl propionyl, acetoin and diacetyl are all part of a flavouring family known as diketone, and these can harm people if they are consumed through inhalation.

Diacetyl, in particular, became well-known for this when the media reported a case of workers in a popcorn factory who developed a lung disease known as bronchiolitis obliterans or popcorn lung.

Nevertheless, it’s important to be aware that the amount of diacetyl used in e-juices is 10-100 times less than that found in traditional cigarettes.

How to Build a Coil