A brand name recognised by practically every vape user in the Western world, Voopoo has released a new pod mod.

Acting as somewhat of a successor to the Vinci model of Voopoo device, the Drag S uses much of the same internal technology and features that successful line of products had but improves on it in some subtle yet effective ways.

Once again, Voopoo manages to pack a lot of quality into such a small and unsuspecting device.

These pod-style all-in-one devices are sure to impress even the most seasoned vape user due to the effective components inside and the great build quality, amongst other factors. 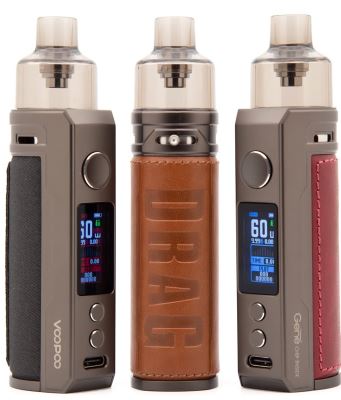 Being an all-in-one kit, the Voopoo Drag S is designed to function practically straight out of the box.

All you need to do is fill it up with your favourite e-liquid, let it saturate the wick for a moment and press the fire button when you are ready.

When you open the box, you will be greeted with the device itself on top. Removing the device from the box will let you get into the rest of the kit.

The classic Voopoo PnP pod should be found next. This fits onto the top of the device with ease and is just as high quality as you would expect from a Voopoo device.

The kit also contains the Type-C cable needed to charge the device.

As we will discuss in more details later, the device itself has several intriguing components inside that truly set it apart from the rest of the competition on the current market.

In particular, its GENE-TT chipset. 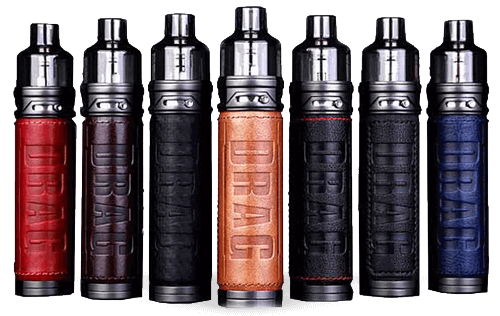 The first thing to mention when it comes to the Drag S’s design is its simultaneously striking yet subtle overall aesthetic look.

The leather texturing on the outside of the device adds a uniquely alluring sense of style, giving the immediate impression of quality due to the materials used.

The subtle threading on the leather also adds to the overall sleek look of the kit. The leather also feels satisfying when the device is in your hand, making it feel quite substantial and high value whilst retaining its lightweight design.

The build of the Drag S is of similarly high quality. The kit has been manufactured using a PCTG material which gives the kit an overall feeling of sturdiness and reliability.

Despite its small size and pod-style design, this kit is definitely a sturdy one with plenty of sleek styles to boot.

As previously alluded to, the Drag S has the excellent GENE-TT chipset inside. This particular chipset essentially functions as an updated GENE-AI chip just with one additional feature that wasn’t present before.

This new feature is the Score Ranking Mode. This feature basically gives each puff of the vape a score. These scores are consistently added on top of each other, leaving you with an overall “Vape Score”.

Many users may see that as a completely useless function that needlessly takes up half of the mod screen, but some may find some form of enjoyment in racking up the points after a long session.

Using the mod is very straightforward. Seasoned vape users will find the device exceptionally easy to use.

Just click the power button in five times to start the device up, press the directional buttons to adjust the wattage, and press the fire button when you are ready to go. 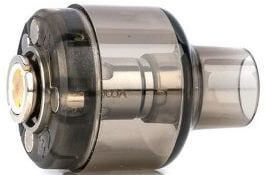 The Drag S pod utilises a bottom-fill system. The filling port is quite large for a device of this size, but luckily, no leakage issues should occur while you are using the kit.

If you need to replace the coil inside the device, then you just need to carefully pull out the used one and simply put the new coil in its place.

The pod itself attached to the mod via a set of four small magnets that latch onto the top of the mod with absolute ease.

When you have attached the pod to the mod, the device should automatically detect what wattage the kit should be set to.

The coils themselves work exactly as they should, even with the reduced wick hole size. The 0.2-ohm coil produces an excellent flavour, especially when you close the airflow a little to help warm up the cloud and the mouthpiece of the kit.

The 0.3-ohm coil is surprisingly powerful. If you are the type of vape user that prefers a powerful vape, then you should absolutely use the 0.3-ohm coil.

Even after excessive usage, the Drag S should not show any signs of leakage at all, not even a single droplet should be visible anywhere on the device.

Both coils should last for quite a long duration as well, being able to vape at least five separate fills of e-liquid.

Due to the somewhat limited airflow options of this kit, the mouth-to-lung vaping experience is not that great, especially when compared to vape kits that specialise in MTL vaping.

However, the direct lung vaping experience received with this kit is truly excellent.

Generally speaking, the battery life of the Drag S is pretty decent, especially for a smaller pod-style device.

The 2600mAh battery inside the mod may not be the most powerful one on the market, but it gets the job done.

It takes roughly around an hour and a half for this mod to receive full battery when charging it with the Type-C cable that comes with the kit.

On average, the Drag S can usually get through about two pods before reaching low battery, but obviously, keeping the wattage of the device lower will mean that your charge lasts for longer.

Voopoo once again shows the world just what it can do by providing vape users with another excellent pod-style vape kit.

The Drag S’ great performance and decent battery life are just some of the reasons to look past this kit’s smaller design.

Convenient, simple, and easily concealable. There is plenty to love about the Drag S, and you should see it for yourself.