A collaboration that has been proven to work very well, indeed, this Widowmaker RTA has been created by two industry veterans, Vandy Vape and El Mono Vapeador.

El Mono Vapeador has an extensive history in the vaping industry, especially amongst Spanish audiences.

Vapeador has worked as a Spanish vaping reviewer for years, and his opinions are generally some of the most listened to points of feedback for the larger companies.

This is why the Vandy Vape manufacturer has decided to partner with the creator, to produce a product that is sure to please all vaping demographics, especially the critics.

So, let’s find out if this RTA was worth all the collaborative effort and time. 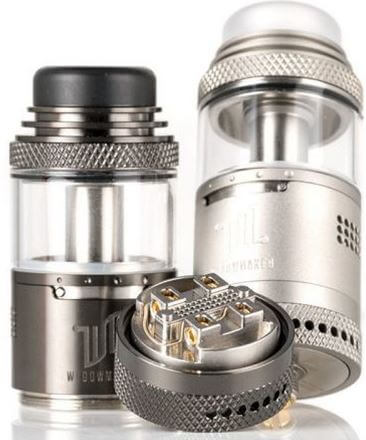 This Widowmaker kit comes with all you could ever possibly need to have a fully customisable vaping experience.

The kit obviously comes with the titular Widowmaker RTA. The details of this excellent piece of tech will be discussed in a few moments time.

One of the barrels is a dual round barrel whilst the other is a dual cycloptic barrel. Two separate coils are also included. Both of these coils have been made with triple fused Clapton and give readings of 0.35-ohm.

This kit includes a spare 6ml bubble glass as well as an easy-to-use coil trimming tool that can come in very handy. A set of spare O-rings, washers and grub screws are also included.

The capacity of the RTA is 2ml as standard, but a 6ml capacity is available via the glass extension. This kit allows for both single coil and dual coil build options.

As can be expected from all Vandy Vape products, this model has been manufactured with the utmost care and mechanical precision.

This is yet another very well-made product by the company that feels just as reliable and sturdy as it should. The threads used throughout the kit are smooth, and the O-ring tolerance is excellent.

This kit has quality in all the right places. This RTA is surprisingly tall, however, meaning that most devices it is placed on are likely to become fairly top-heavy.

But this shouldn’t be an issue if you use it in conjunction with a bigger and heavier vape device. This taller design may also not be everyone’s preferred look, but in using a bigger device, the size difference is barely noticeable.

Both straight glass and bubble glass options are included in this kit, so if you have a particular preference on how either looks or feels you can feel free to choose for yourself.

All of the components of the RTA can be moved and removed with relative ease as all parts use an interlocking system. This system may take a little getting used to, but the inner workings of the device will become quickly apparent with time.

How To Build and Wick the Tank

The Widowmaker utilises a two-piece deck that is postless. This deck has quad terminals. The deck is heavily suggested to be used with a dual-coil system, but a single coil system could technically work with it, although there are no dedicated airflow options for a single coil system.

The guide included with the kit suggests that you cut the coil leads so that they reach 5mm. This may be too long for some users so you may want to make sure that they are 4mm in length instead if you prefer your coils closer to the deck.

The atomizer chamber has designated slots on either side of it. This is where the airflow travels through on one side and where the juice comes in on the other.

This compact design is effective but can make the building process a little tricky as there is very little room to position all of the components.

When wicking the RTA, make sure that the cotton used is not too tight. This should produce a more flavourful vape with less dry hits.

The cotton needs to be cut quite short as there isn’t much room to fit the ends into the wells. The top-fill system should ensure that the cotton on the wick is fed directly, thus giving a denser vape overall.

The bottom airflow uses a honeycomb-shaped system that features a multitude of air holes all around it. These holes even go onto the deck of the RTA and the airflow control ring.

The airflow control ring itself features seven minuscule holes on each of its sides, and the deck has 36 holes that are located underneath the coils.

The airflow rings included with the kit are very effective. One of the rings included features the same honeycomb design that the RTA itself has, with 15 holes on each of its sides.

One of the rings included has a large 4mm diameter hole. The last ring included in the kit has a horizontal slot in it as opposed to a circular one. This slot is 5mm by 1.5mm in area.

The honeycomb-shaped airflow ring tends to provide the best results for those looking to get a quiet yet effective airflow system in place. The ring with the horizontal slot should be used by those who prefer a somewhat restricted lung hit.

When it comes to the Widowmaker’s performance, there is a great deal to be said. The first thing that should be noted is the RTA’s seemingly complicated design.

When first looking at the RTA users may feel a little overwhelmed by all of the moving parts and all of the varied options that come included with the kit.

But thankfully once you’ve spent enough time with the kit, going through each of the pieces and working out what each one does, the RTA quickly becomes a thing of beauty as opposed to an object of fear.

The deck of the RTA should be relatively easy to take off and put back on. The overall performance of this RTA should be excellent, although this does depend on the efficacy of your build techniques and the vape device you choose to use it in conjunction with.

But overall, this RTA should give you great results.

The Widowmaker is a particularly interesting model of RTA. Below are just a few of the pros and cons we have noticed when using this model:

The Widowmaker is a clear example of a collaboration done right. Both Vandy Vape and El Mono Vapeador have produced a truly high-quality RTA.

Whilst it may be a little tricky to understand immediately, especially for those who are relatively new to rebuildable decks and atomizers, the various components included in the kit take only a little time to learn about.

The sheer amount of airflow customisation options alone makes this an RTA worth picking up.