There are many articles out there telling you all about how dangerous smoking tobacco can be thanks to the 7000 plus chemicals found in the smoke that is produced, however there are also numerous benefits to swapping to vaping e-cigarettes instead. Vape pens have been designed as an alternative to smoking regular cigarettes and there are a large number of reasons to make the switch. Here are some of the top advantages to vaping:

Vaping does not involve combustion as it works by heating up a solution and turning it into a vapour. This means that there is no ash produced so you can consign the smelly overflowing ash-tray to the trash. As there is less mess to clean up when vaping, you will also never again have to sweep up the layer of ash from your floor, meaning that your home is cleaner and tidier.

Tobacco smoke is packed with hundreds of dangerous toxins including 70 known carcinogens. There are 600 chemicals in tobacco cigarettes (including tar, ammonia and carbon monoxide), and while e-cigs do contain nicotine as well as  diethylene glycol which may be toxic, they have far fewer levels of harmful chemicals than a regular cigarette.

One cartridge gives you the same amount of nicotine as you would find in a pack of 20 standard cigarettes. As you can purchase five packs of cartridges for the same cost as two regular cigarette packs it is easy to see how much money you can save by making the switch.

4. A World of Choice

There is a huge amount of choice and variety when it comes to choosing e-cigs, with new brands appearing all the time. When you switch to vaping, you are opening up a world of opportunities.

While there are very limited flavours of regular tobacco, e-cigarettes are very easy to flavour meaning that you can enjoy your nicotine in combination with a host of delicious and unusual flavourings. Whether you would prefer fruity tastes, cocktail flavours or dessert-like treats, there are options to suit every preference and if you want something a bit more traditional, there are even some classic tobacco or menthol flavours.

6. A Choice of Strengths

While it is impossible to change the strength of nicotine in your regular tobacco cigarette without switching brands, e-cigarettes come in variable nicotine contents so you can choose the strength that best suits you. If you like, you can start out with an 18 mg cartridge and then work downwards, ending up at 0 mg if you would prefer to manage without nicotine at all.

7. The Same Sensation as Smoking

E-cigarettes have been designed with the experience of smoking in mind, so vapers can replicate the sensation of smoking thanks to the realistic throat hit, cloud of vapour that is very similar to smoke and even, sometimes, a glowing tip whenever you inhale. Some vape pens even feature cigarette-like butts, while the sensation of holding something in your hand and regularly inhaling and exhaling will make you feel like you are smoking your usual cigarette.

Using vape pens is not smoking, it is vaping and as they only heat the e-liquid rather than combusting tobacco, they usually are not covered by the smoking ban so you can use them in many more places where regular smoking would be forbidden.

Although e-cigs use modern technology they are still easy to use. The majority are 2 piece models, requiring the user to simply screw the cartridge end to the battery and begin puffing immediately. Generally, the batteries are automatically activated, creating the vapour which is emitted from the mouthpiece during inhalation.

When you smoke a cigarette and fall asleep, you are flirting with disaster. Not only are you putting your property at risk of damage, but you could even be badly injured or worse. When you fall asleep holding a vape pen, there is no risk at all since there is no fire involved.

Regular smoking causes an unpleasant smell which can be very off-putting. Even smokers often dislike the smell of smoke on their clothes and furniture. Only a faint smell is produced by an e-cigarette and that is only from the flavouring. Switching to vaping means that you and your home no longer smell like an ashtray. Also, your skin will no longer have an unpleasant yellowish tinge and your hair and skin will start to look younger and healthier.

Smoking regular cigarettes means that your teeth become stained by the tar and other chemicals. As these are removed in e-cigarettes, you can enjoy having stain-free teeth as well as much fresher breath.

When it comes to smoke, e-cigarettes are very efficient, pumping out nothing from the tip. Also, as they are safer than regular cigarettes, they are risk-free for those around you making the dangers of second hand smoke to your family and friends a thing of the past.

Tobacco smoke causes irritation to the throat due to the high toxin content, and this can result in a smoker’s cough. As e-cigs do not have these toxins, you can say goodbye to your irritating cough.

Tobacco smoke contains no less than 70 known carcinogens whereas e-cigarettes only contain propylene glycol (a substance found in smoke machines), nicotine, and the same food flavourings that you could find in your local grocery store. While there are trace amounts of nitrosamines, which are carcinogens produced during the nicotine extraction procedure from tobacco, these are also found in similar quantities in FDA approved nicotine patches.

Since you are exposed to 1400 times more carcinogens when smoking regular cigarettes, you are hugely cutting your chances of developing cancer when you switch to vaping. As well as cutting your risk of cancer, you will also find that within 24 hours of quitting tobacco you lower your risk of having a heart attack and will feel less anxious. Within just a few more months, your lung function, sense of taste and circulation will all go back to normal too.

E-cigarettes are better for the environment as they do not emit air-polluting organic compounds in the same way as regular tobacco.  Also, as they produce no ash or cigarette butts, they do not cause all of the problems that regular cigarettes do when butts are washed off the streets into drains where they can then end up in lakes, rivers and streams.

When this happens, the cellulose acetate filters leach 4000 chemicals into the water, harming and killing wildlife, and they can never be biodegraded. In contrast, most modern devices can now be recycled making them a much more environmentally sound option.

Public Health England and The Royal College Of Physicians have both issued a report to prove that vaping is definitely considered to be 95% safer than smoking tobacco. Although there were some early reported issues about safety, these were from first generation e-cigs that are no longer in use or as a result of using an incorrect charger meaning that, when used correctly, modern vape pens are safe to use.

Although there are some pharmaceutical methods that have been shown to help smokers to quit the habit, these involve taking drugs regularly. Many of these began as anti-anxiety or antidepressant medications and may have side effects such as nausea or negative interactions with alcohol. Vaping causes none of these problems and the only drug you will be taking will be nicotine, which you can reduce in strength over time.

Smoking seems to come with a social stigma attached these days, especially among professionals. If you switch to vaping, you will no longer exhibit any of the familiar signs of smoking and people will also be interested in your experience with vaping. Vaping can help to start conversations whereas smoking is sure to kill them off.

While you are probably vaping with the eventual goal of giving up smoking tobacco cigarettes completely, you may need to wean yourself away from cigarettes gradually. Dual use gives you time to set yourself up with the right equipment and try out different flavours of e-liquid before making the switch entirely to e-cigarettes.

Other stop-smoking methods like the nicotine patch do not give you this option since they deliver a set amount of nicotine and this can be raised to dangerous levels if you smoke tobacco at the same time as wearing a patch. There is no risk of this with vaping as a hit from an vape pen produces the same amount of nicotine as you would get from an e-cigarette. 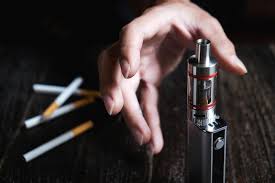 As you can see from the many reasons outlined above, the advantages of switching to vaping from tobacco cigarettes are clear. From improving your health to saving money, vaping has numerous benefits for the ex-smoker. Swapping to vape pens will prevent you and your home from smelling like an ashtray and you will no longer be subject to the social stigma surrounding the habit. As e-cigarettes are also safer for humans and for the environment too, it makes sense to give them a try if you are ready to quit smoking.