e-cigreviews.org.uk
Home Blog The Truth Behind the “My First Vape” Meme 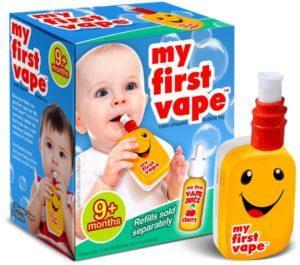 A little while back now, August 2017 to be exact, there was a sudden influx of negative press towards the vaping community. I know, tell me something new. But this was unlike other forms of negative press.

On the surface, this is just a harmless joke that is actually quite humorous, mocking society’s willingness to quickly jump on a bandwagon the minute it gains popularity, as vaping has done.

However, behind this humorous exterior may lie a more sinister reasoning. Perhaps the meme was actually intended to fool those who are less internet-savvy into actually believing that children are being encouraged to vape.

Within the course of a weekend the image was on all social medias with the very original image having well over 150 retweets within a matter of moments.

The alleged creator of the internet meme is a man by the name of Adam Padilla. Padilla is the co-founder of a company named BrandFire. BrandFire is a Manhattan-based marketing and advertising consulting company.

A quick browse on Padilla’s very own website will tell you that he is “part brand strategist, part creative director and part disruptive social media personality”.

This description should immediately tell you everything you need to know about who we are dealing with here. Padilla considers himself to be “truly embedded in today’s popular culture”.

Several avid internet-savvy vapers in the online community independently worked out that the company Padilla sometimes works for is in fact the pharma giant known as Pfizer.

Pfizer are well known as the sellers of the quit-smoking medication Chantix. Pfizer spends a lot of money on fellow companies and organisations that strive to discredit both smoking and vaping products alike.

So, the question must be asked, did Adam Padilla create this social media meme as a form of protest against vaping because his clients asked him to? That’s probably not the case.

Padilla actually has a long history of making fake advertisements for his social medias. One of these fake ads even used a children’s toy like his vaping one did.

That meme was centred around a “Fisher-Price Happy Hour Playset” and that also got him a lot of media traction.

As was expected, Padilla has come out and stated that the fake ad had a “higher purpose”. Padilla said that he created the meme as a way to warn the world about fake news.

In an interview with Mashable he talked about the “power of the internet” and how it takes very little effort to spread news very far thanks to a mix of “pop culture and realism”.

While he may not be wrong about that, his actions may have set back the vaping community a few months when it comes to trying to legitimise vaping.

No matter his reasons, or lack thereof, Padilla will surely try something like this again, just as he has done in the past, so make sure that you’re on the lookout for it and that you’re ready to shut down any one of the closed-minded audiences that believe his false words.