e-cigreviews.org.uk
Home Blog How Long Does Nicotine Stay in the Body?

The question of how long nicotine stays in the body can be an extremely important one in certain circumstances.

For instance, if your employer asks you to complete a nicotine test at a specific date and time, you need to know how long before the test that it is safe to smoke.

These tests are usually done to determine health insurance boundaries, so they mustn’t be taken lightly.

You should know exactly how long nicotine lasts for in your body and what it does to your body during this time.

This article sets out to explore the different ways that nicotine levels in the body can be tested and how long the effects of nicotine can last for.

Nicotine’s Duration in the Body

Nicotine is very difficult to detect in the blood after 1-3 days. Similarly, nicotine is hard to measure in the urine after around four days.

This is one of the main reasons why employers and insurance companies often no longer bother with the hassle of testing for nicotine, and it is very hard to detect.

Instead, employers and insurance companies often test for a substance known as cotinine. Cotinine is a metabolite of nicotine which means that nicotine is converted into cotinine by the liver.

This means that cotinine is still detectable in the body for as long as three weeks as it does not get broken down further.

The length of time that cotinine remains in your body can differ greatly depending on several factors.

Some of these factors include diet, medication, gender and even ethnic background.

For instance, women tend to have lower levels of cotinine in general than men do.

Testing the blood for cotinine is highly accurate as it can detect both cotinine and nicotine.

However, blood testing is also the most invasive and expensive testing method, so it is not as often used by testing companies.

This expense comes from the need to use trained technicians and the requirement to be in a sanitary, official lab. There are two distinctive blood tests for cotinine.

One test is a very rudimentary positive or negative result, and the other test manages to quantify the level of nicotine or cotinine that is in the blood sample. 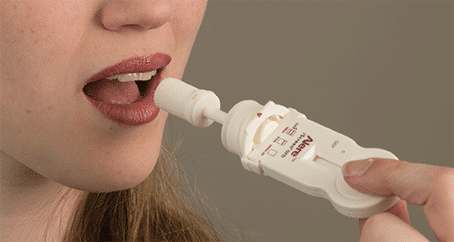 Saliva testing often yields the most quantifiable results when compared to other common testing methods.

Many testing companies have switched to this method in recent years because of this. Saliva testing can detect cotinine roughly 1/3 higher than blood testing can.

One of the greatest benefits to saliva testing is that it is a quick process that is not very invasive, therefore making everyone involved feel a lot more comfortable.

The process usually only involves a quick swab of the mouth. This swab is then properly sealed away and shipped off to a lab where it is thoroughly tested and analysed.

These results are then available online to the employer or insurance company. This whole process is a lot less expensive than blood testing and takes much less time.

Urine often contains much higher levels of cotinine than the blood or saliva does, sometimes even as much as six times higher.

Urine testing is then the most reliable result for checking low concentrations of cotinine in the body.

The process itself is relatively easy; a test strip is lowered into a urine sample and left there for a few minutes.

The sample should then deliver either a positive or negative result based on the colour received.