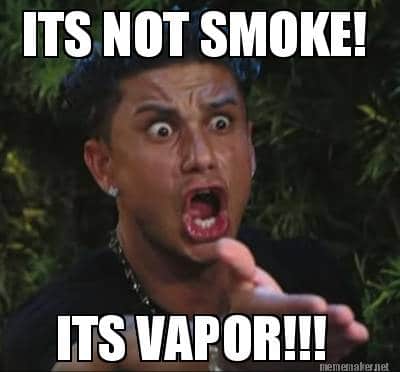 You know the kind of person we’re talking about. You know, that woman that blows big clouds from her e-cig inside the theatre, and then wants to be offended when fellow movie-goers ask her to take it outside.

Just like tobacco cigarette smoking, there is etiquette with vaping and it really has nothing to do with segregation. It is simply being considerate and well-mannered.

It is much like taking the crying baby out of the church during a ceremony or services. Yes, you have the right to be there, but there is more than just you and the rest of us have the same right.

Maybe you are being a Vapehole, but you aren’t aware of it. Let us help you out! We’re going to tell you about 5 of the most frustrating habits of vape users that make you a Vapehole.

The most apparent and widely-repeated habit of a Vapehole is the cloud-chasing in public.

There is absolutely no need to blow those billowing, dense, clouds of vapour at the bus stop, in the local bar or any other public place that is either crowded or enclosed.

That “look-at-me” vape cloud is totally unnecessary. So you have the new ‘adult pacifier’, we non-smokers, non-vapers really don’t care and we aren’t impressed.

Be subtle and practice standard vaping that can be easily ignored, please.

Maybe you aren’t the cloud-chasing vaper user but if you blow your vapour straight at another person, you are a Vapehole. It may not be as annoying as those who blow tobacco smoke in other’s faces, but it still isn’t pleasant.

Whether the facts have proved second-hand vape safe or not really doesn’t matter either.

Whether you’re doing on purpose (which would make you a Class A Vapehole) or you simply aren’t aware of where your vape is going, you are certifiably a Vapehole.

Vaping Where You Shouldn’t

One more classic Vapehole attitude is “It isn’t smoke, so I can vape wherever.” Yeah, in the beginning, the selling point of vaping was it could be done anywhere, but as anything in life, things have changed.

If you are a vapour user that ‘assumes’ you can do your vaping without asking, you are a Vapehole. This includes not just private homes, but public places like the movie theatre, the mall, on a bus or subway.

Looking Down On Smokers

You are proud of yourself for switching from tobacco to vaping. This substantially minimised your risk of diseases and illnesses caused by nicotine. But that didn’t appoint you to be the Vaping-God of all people.

It didn’t make you superior to those who do smoke tobacco. Just like eating healthy and finding a religion that makes you feel good, don’t brag about it but be willing to answer questions.

If you find yourself telling fellow-vapers that they are using the worse or wrong kind of e-cigarette, then you are being a Vapehole.

If the mech style is best for you, awesome, but that doesn’t mean it is for everyone. If the eGo and a basic cartomiser are what work for one vapour user, then that’s their thing.

Not everyone like their fries drowned in ketchup, they prefer to dip them catsup on the side. It is an opinion and opinions are not right or wrong.

So if you are one of those that think your style of e-cig is the best and go around telling other theirs is wrong, you are a Vapehole.